conf.kde.in 2017 was held in the big and beautiful campus of IIT, Guwahati in Assam. During 10th to 12th March, the conference schedule was 2 days of talks followed by a day of workshop. Talks were lined-up in single track which helps attendees not to miss any talk. Conference pictures from my camera are available at flickr. 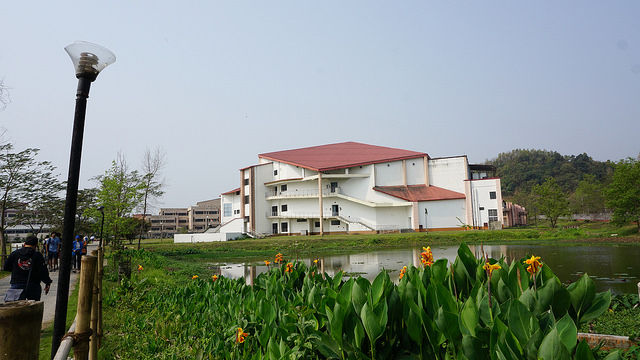 The first day started with inaugural ceremony where college professors and Valorie lightened up candle to start the conference.
Later, Valorie Zimmerman gave a keynote on Your Superpower. This talk was to motivate everyone to believe in themselves because each one of us have got superpower. To do something, it is very important to first believe in yourself.

Further, Shantanu gave an introductory talk on Qt and QML and showed some live demo explaining how easily UI can be created using QML. This talk was one of the important base for 3rd day workshop.
Bhushan gave talk on different KDE projects where one can contribute like KDevelop, Plasma, Krita, Kstars, Calligra, etc. He also provided some important information useful for beginners like how to get a KDE project’s source code, joining project related mailing lists and asking questions on respective IRC channel on freenode. Also talked about junior bugs associated with project – an easy way to start contributing to a project.
First day ended with Pradeepto’s talk of his 11 years experience with KDE and how he made so many friends across different parts of world. I feel that this is one of the best part of any conference, we meet friends with whom we work remotely and also make some new ones.

The 2nd day started with my talk on how I use KDE software to survive. I started using KDE desktop as my primary desktop since I was in college in around 2009. I strongly believe that to start with contribution to any software, it is very important to first use it and understand it. This gives new contributors a better idea where she can start contributing.
In my talk I discussed some KDE software which I use everyday for my personal as well as professional work. Slides for my talk are available at github.
I liked Shantanu’s talk on using GammaRay to debug QtQuick applications. He showed how he uses GammaRay to debug his office project called SoStronk – desktop application written in Qt and QML.
Another interesting and amazing talk was given by Aditya Mehra on Mycroft integration with KDE in the form of a plasmoid. Mycroft is an open source voice assistant application which can run anywhere – on a desktop computer, inside an automobile, Raspberry Pi and so on. One can view a pre-recorded video available on YouTube and yes if you don’t like the voice, you can add your own custom voice. 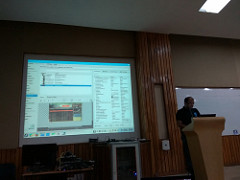 There were other several interesting talks on topics like GCompris, GSoC 2017 and how one can participate, Journey of SuperX – Linux based OS + KDE software started in Assam, India.

Most of the attendees were college students and it was important to give them some hands-on experience to help them to start with contributing to Open Source. Ashish Madeti started with explaining importance of git and how create a project with git version control setup, doing commits and other basic stuff. Attendees were trying in parallel on their laptop and we helped attendees individually to make sure they are able to do it themselves.
Later, Shantanu Tushar and Tony Thomas started with creating basic UI project using QML in Qt Creator. They explained how to browse documentation in Qt Creator for available components. Attendees tried on their own laptop and we all helped them to solve problems that they were facing.

There were many other interesting things discussed during the conference which is hard to cover in a single blogpost.
A big thanks to all volunteers who helped from start of the conference till end. Special thanks to Bhushan Shah for organizing it and KDE eV for sponsoring my travel.
With each conference, we get some awesome KDE contributors and hoping the same this year!
Advertisement

Last week, I attended foss.in 2012 in Bangalore. It was three days conference consisting of various interesting talks, tutorials and mini confs. The Schedule was divided into three conference rooms. There were good arrangements for everything including registration, food, hacking area, sponsors stall, booth, etc.

Started with registration followed by opening ceremony with Atul Chitnis sharing his ideas, followed by lighting of the lamp.

First  talk I attended on Big Data by Gopal V where he talked about how to handle big amount of data, filtering, removing duplication. He also discussed about various challenges arises in handling big data like reliability, optimization, sharing, security, etc.

Further I attended talk on Wikidata where Lydia Pintscher explained the idea behind it. The Wikimedia aims Wikidata to become what Wikimedia commons is for images – a central repository for all the wikipedia content. Some of the advantages this will bring are easier localization, more machine readable content, sharing of content between wikis and so on. Wikidata will also provide a public API that developers can then consume to make it easy to access information.

Next day, I attended talk on Scalable Parallel Programming Techniques by Ulrich Drepper. It started with history of how changes has occurred from uniprocessor to multiprocessor. Then, concept of parallelism, lock, thread, thread pool, c++ 11 interface, etc. Various possibilities to achieve parallelism like reuse of threads, automatic detection of dependencies, optimized thread pool implementation and so on.

Later, I attended talk on optimized thread pool implementation by Lennart Poettering. Systemd is  core of distributions like Fedora, OpenSUSE, Mageia, Tizen. He discussed how systemd is better than init daemon. He also discussed about sysvinit, initd, git as daemon, consolekit, syslog, watchdog, autofs, udev, cryptsetup and many more.

Post lunch, I attended talk on Calligra – productivity made easier by Shantanu Tushar where I learnt about some internals on how Calligra suite works and people can use it in their applications.

This was followed by KDE mini conf where Sebastian Kügler organized a workshop for writing device adaptive applications using QtQuick. It was exciting to see that in addition to students, seasoned professionals were interested.

Last day of conference, I attended talk on KGDB: Kernel Source Level Debugger by Swapnil Pimpale. kgdb is used with gdb to debug linux kernel. He told various advantages of using kgd like placing breakpoints in kernel code, stepping through the code, observing variables, inspecting memory and looking through call stack information. He also discussed how to setup kgdb, its usage, working and limitations.

Rest of the day, I was at the KDE booth where we were showing people Plasma Active demo on ExoPC tablet and Plasma Media Center  demo as well. People loved it and some of them were interested to contribute 🙂 We helped few of students in how to start contributing into Open Source Projects. We were happy to know that one of them was able to find one bug too 😀

Some of talk’s videos are available at http://hasgeek.tv/fossdotin/ .

I enjoyed in being a  part of foss.in 2012, met old foss friends and made some new ones 😀 Thanks to Red Hat for sponsoring my attendance at foss.in 🙂